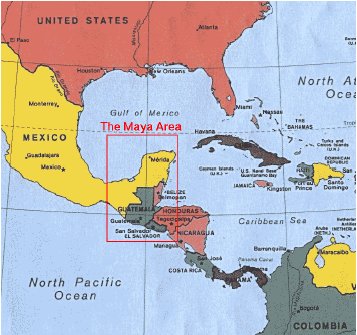 Inevitably the Maya have been linked with Atlantis by a number of writers such as Lewis Spence and E.H. Thompson who claimed that the Maya were descendants of Atlanteans. The maverick, Augustus Le Plongeon, was alone in identifying Atlantis as a colony of the Maya and that their language was in fact Greek!   Others, such as Jean-Frédérick Waldeck, included an Egyptian linkage as well. However, trumping all that is a recent claim that the Maya had contact with extraterrestrials and that a documentary providing evidence is planned(b). In a similar vein is the latest English language publication from Erich von Däniken entitled: Astronaut Gods of the Maya[1422].  Semir Osmanagic, of Bosnian pyramid fame, added a twist to this proposed linkage, when he claimed[0519]  that the Maya had come from Atlantis, which in turn had been founded by visitors from the Pleiades!

July 2012 saw a report(j) on the discovery of the largest Mayan man-made dam at Tikal in Guatemala, which was 33ft high and 260ft long and included sand filters. Ten years later, it was discovered that the Maya had also the ability to engineer a water fountain in their city of Palenque(v) and had advanced water management systems(z).

In 2020, the largest and oldest Mayan monument in Mexico was identified. It is in the form of a ceremonial platform which is between 33 and 50 feet tall and is nearly a mile long(x). The structure, dated to around 3,000 years ago and was discovered with the help of LIDAR in the state of Tabasco.

The Mayan calendar has provoked speculation and controversy ever since its discovery. Its origins are obscure, but one interpretation is that the world we live was created on this day in 3114 B.C. A quite different view was proposed over seventy years ago by Georg Hinzpeter of the German Hoerbiger Society who claimed that our Moon was captured by the Earth in June of 8498 BC and that it became the zero date for the Maya.(y)

In a paper entitled On the Mayan Chronology, Emilio Spedicato offers a number of ideas regarding ancient meso-american chronologies. For example, he proposes that the large numbers used by the Maya and Toltecs record days rather than years. Many of his ideas stem from the work of Immanuel Velikovsky, John Ackerman and the Tollmans.

>Kurt Schildmann’s 2003 book [1759],  was reviewed by Dr. Horst Friedrich who commented that “One of the provisional results of Schildmann’s decipherment of the Maya script, and study of the Maya language, is the rather sensational discovery that words from several Old World languages (Sumerian, Accadian, Indo-Iranian, Phoenician, Hebrew and Basque) have somehow found their way into the Maya language.”(aa) I’m sure this will be disputed!<