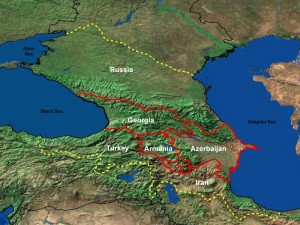 mountain in Europe, Mount Elbrus (Russia). In ancient times it was the location of several kingdoms of whom two were known as Albania and Iberia

Delisle de Sales was probably the first to suggest the Caucasus as the home of the original Atlantis, with refugees from there establishing Plato’s Atlantis in the Central Mediterranean. However, the greatest proponent of the Caucasus location for Atlantis was R.A. Fessenden who wrote an extensive multi-volume work[1012] on the subject early in the 20th century. 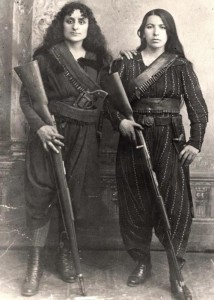 the hydrology of the Caspian Sea(a), where he identified strandlines up to 225 metres above sea level, which he considers to be evidence of a vast inland Eurasian sea at the end of the last Ice Age. In Azerbaijan, he also found cart ruts similar to those on Malta as well as stone circles on the Absheron Peninsula(b).>Professor E. N. Badyukova has offered some critical comments regarding Gallagher’s claims(k).<

Flinders Petrie also referenced Fessenden in his (1926) paper The Origins of the Book of the Dead(f), in which he concluded that “that the cultural connections of the earliest Egyptians, as well as the physical descriptions in their mythology, point to the Caucasus region. When, further, we find there the names of the principal places of the mythology in their relative positions, it gives strong grounds for regarding that region as the homeland of the earliest civilisation of the Egyptians.”

A few years later, an article by M. A. Murray in Antiquity (Volume 15 – Issue 60 – Dec. 1941)  noted that Petrie’s “opinion was based entirely on literary and philological evidence” resulting in archaeologists being slow to accept it. To partially counter this Murray offered two pieces of evidence in support of Petrie’s proposed Egyptian-Caucasus connection.(i)

However, I must point out that in 1874 Hyde Clarke delivered a paper to the Royal Anthropological Institute in which he claimed that the Colchians in the Caucasus had been an Egyptian colony(h). Clarke also employed language similarities to support his contention. So we can reasonably ask, who was right or were both wrong?

>A forum on Graham Hancock’s website offered some more discussion about an Egyptian link with the Caucasus(j).

Jean-Michel Hermans has claimed that the megalith builders of Brittany originally came from the Caucasus, and arrived there after a stop in what is now Bulgaria around 5000 BC(l).<

In the Krasnodar region of southern Russia hundreds (3,000 and counting) of dolmens are to be found on both sides of the Caucasus. Interestingly, they show a distinctive form of megalithic architecture(g).

I feel that the Caucasus will have a lot more to tell us.

(g) The mysterious dolmens and megaliths of the Caucasus – The Tapestry of Time (larazzodeltempo.it)