Malta: Echoes of Plato’s Island [209] by Anton Mifsud, Simon Mifsud, Chris Agius Sultana and Charles Savona-Ventura is a large format, well illustrated and referenced, if somewhat slender book. There are valuable notes, many of which could have been included in the main body of text. Unfortunately, it lacks a comprehensive index, but it is an important addition to the 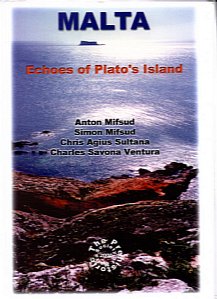 The book presents, in a very rational manner, the case for considering the Maltese islands as remnants of Atlantis. The authors highlight a wealth of evidence for the islands being far more extensive in area in the distant past but within the experience of man. For example, the surface of Malta today is totally incapable of generating the volume of water that was required to scour out the islands extensive valleys. This anomaly was first commented on as early as 1791 by the French geologist, Déodat de Dolomieu (1750-1801).

Mifsud et al. discuss the archaeology and geology of the region and the compatibility of the existing topography with Plato’s description. Classical sources are liberally quoted in support of their theory. It is generally accepted that the archipelago was once fully connected and considerably extended southwards. Claudius Ptolemy writing in the 2nd century AD records this southern extension of the islands as being enjoyed by human inhabitants and its existence orally transmitted into historical times. Ptolemy gives co-ordinates for the latitude of the temple of Hercules ten minutes (10’) south of the present landmass or about 11 miles.

The book introduces to the Atlantis debate, the concept of biogeographical indexing, which is designed to indicate the probability of an island being colonised based on its size and distance from a mainland. *Mifsud draws on the work of Mark Patton [1574] and that of MacArthur & Jones [1575] for the relevant biogeographical data.*

On this basis the islands of Pantelleria and Lampedusa, one of the Pelagie Islands, which lie between Malta and the North African mainland, have the lowest biogeographical indices in the Mediterranean. However, both Lampedusa and Pantelleria were occupied as early as the 6th millennium BC, suggesting that they were probably, at that point in time, greater in size or even part of a single more extensive landmass that included the Maltese archipelago.

*A further biogeographical element in Mifsud’s theory, of a much larger Maltese landmass, is the distribution of the podarcis filfolensis wall lizard, which is only found on the Maltese and Pelagie islands.[p.26-27]*

Mifsud and his collaborators proposed a date of 2200 BC for the destruction of this lost kingdom. They point out that this date coincides with the collapse of a number of civilisations in the Mediterranean and the Middle East. Their suggested date conflicts with that of their fellow Maltese writer, the late Joseph S. Ellul, who considered the destruction of Atlantis to be a consequence of the Biblical Deluge which he placed many thousands of years earlier.

Charles Savona-Ventura is a medical colleague of Dr. Anton Mifsud, with whom he has collaborated on a number of articles and books[210–214] regarding Maltese prehistory.

Simon Mifsud is also a medical practitioner, being registrar in paediatrics at Gozo General Hospital and was co-author with Anton Mifsud of another book[215] on prehistoric Malta.

Chris Agius Sultana was a professional artistic designer with an interest in underwater exploration and is credited with generating the interest that led to this book.  Sadly, he died in 2007.

This book is now available to read or download online(a).