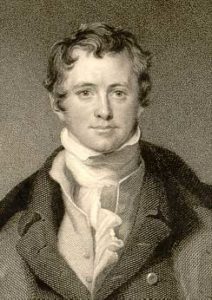 Humphry Davy (1778-1829) was an outstanding scientist in his day, particularly in the field of chemistry. He was probably most gratefully remembered as the inventor of the miners safety lamp.

In his 2016 book, The Experimental Self[1299.163],  Jan Golinski, a history professor, recorded “that Davy had noted that Plato’s story of the submersion of Atlantis might not be the pure myth that was often assumed”.