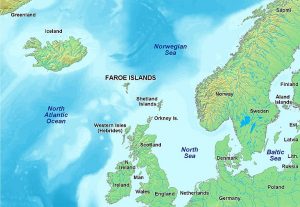 The Faroe Islands are a small archipelago in the North Atlantic between Norway and Iceland. It has been proposed that they contained the island of Ogygia, the home of Atlas’ daughter Calypso. Plutarch recorded that Ogygia was five days sailing from Britain and has been incorporated into the theories of a number of writers supporting a North Sea Atlantis, such as Felice Vinci and later John Esse Larsen.

*Larsen contends that Odysseus means ‘Isse from the island Od’, a former Danish island, which is now a peninsula. In fact he interprets Homer’s Odyssey as a description of a trip around the Baltic Sea(c). Furthermore the Pillars of Herakles have also been identified by Larsen with the village of Eide on the Faroes(a).*

In November 2018, I was directed to a German website(b) which also refers to the Faroe Islands as having an Atlantean connection, but in this case, Jan, its author, proposes that Atlantis was located between Spitsbergen and Franz Josef Land explaining that “It looks like our Earth is Atlantis, and in the northern part of the Earth was hyperborea, Greenland might have been Mu, and Antarctica was Lemuria. It was a pole shift that caused Atlantis to go down. At that time Spitzbergen was probably at the height of the Canary Islands and the Antarctic must have been located at the height of today’s Philippines.”