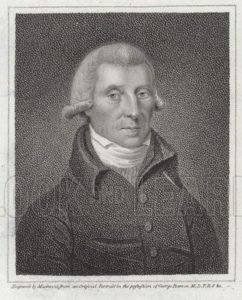 Richard Kirwan (1733-1812) was an Irish scientist, who had a brief (no pun intended) career as a barrister, which he abandoned in favour of his scientific interests, ending up as president of the Royal Irish Academy from 1799 until his death.

Kirwan is usually linked with Buffon, Whitehurst and Pennant regarding the reality of Atlantis (Atalantis) and its location in the Atlantic.