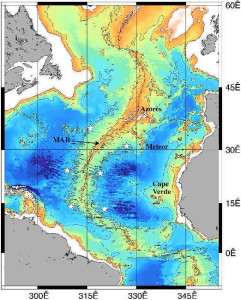 The Mid–Atlantic Ridge (MAR)(a) was first physically located in 1872 by Sir John Murray (1841-1914), the celebrated oceanographer while investigating a route for a transatlantic telegraph  cable aboard HMS Challenger.* John Thomas Short in The North Americans of Antiquity [1192.503] notes “that a member of the Challenger staff, in a lecture delivered in London soon after the termination of the expedition, expressed the fullest confidence that the great submarine plateau is the remains of the ‘Lost Atlantis’.”* (f)

Ignatius Donnelly used the discovery of the Ridge to justify his Atlantic location for Atlantis.

However the MAR was not explored extensively until 1947 and 1948 by a team from Columbia University led by Bruce Heezen in a research vessel named Atlantis. Many commentators claimed that there is no possibility of a ‘continent’ submerged in the Atlantic. However, leaving aside whether Plato actually referred to Atlantis as a continent, the most cursory study of a bathymetric chart of the region shows a number of extensive areas that would have been dry land prior to the melting of the glaciers at the end of the last Ice Age. One of the most obvious is the Azores whose location opposite the most favoured location for the Pillars of Heracles has been seized upon as evidence for considering it as a possible site of Atlantis.

*Christian O’Brien expanded on this in his book, The Shining Ones, an extract from which is available online(c). Andrew Collins’ critical comments on O’Brien’s theories can also be read online(d)  .

A number of writers, such as R. Cedric Leonard, have chosen the Mid-Atlantic Ridge location for Atlantis. Charles Hapgood opted for the Rocks of St. Peter and St. Paul on the MAR, about 1000 miles from the mouth of the Orinoco in Venezuela, as the site of Plato’s famous island.