Andros Island is the largest of the Bahamas Islands, where, since the late 1960’s there have been a number of underwater sightings and discoveries that have generated regular speculation that the area is home to remnants of Plato’s Atlantis.

In 1969 two commercial pilots, Robert Brush and Trigg Adams, photographed a series of large concentric circles in about three feet 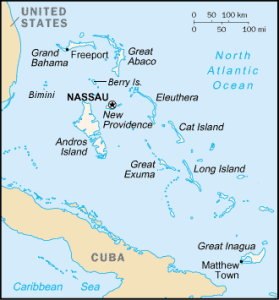 of water off the coast of Andros. Estimates of the diameter of the circles range from 100 to 1,000 feet. Apparently, these rings are now covered by sand. It is hard to understand how such a feature in such very shallow water cannot be physically located and inspected. Richard Wingate in his book[059] estimated the diameter at 1,000 yards. However, the rings described by Wingate were apparently on land, among Andros’ many swamps.

During the 2003 A.R.E. ‘Search for Atlantis Expedition’ an unexpected three tiered structure was discovered off Andros near Nicholls Town at the north of the island. It was approximately 150 feet by 450 yards. It was composed of blocks about 25x30x2 feet. Other features were discovered and more searches are planned. The Littles believe that these structures could only have been built around 8000 BC, but if this were true they would be in much deeper water rather than the 10-30 feet reported as the change in sea levels has been some hundreds of feet since 8000 BC. The A.R.E. reports are to be found on their website(a) and in greater detail in a book by the husband and wife team of Gregory & Lora Little[060]. Further investigations were carried out in 2004 and continue today.