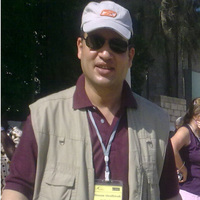 Minia. He has daringly suggested that Atlantis was sited in the Nile Delta and destroyed in 3070 BC(f).

In three rather technical papers(d) Aboulfotouh calculates the date of the building of the Great Pyramid at Giza as 3055 BC, which he claims was also the time of the Deluge or what he refers to as the “tsunami of the Mediterranean”. He also outlines his views on the methods used to design the Giza complex using ‘The Horizon Theory’.(b)(d)

>Diego Ratti, in his 2021 book, Atletenu [1821], has placed Atlantis in Egypt’s eastern Nile Delta with Avaris its capital and so identifying the Hyksos as Atlantean.<