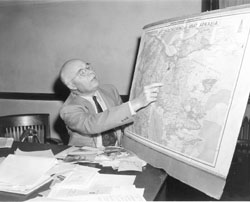 United States in 1913. Plato described both the Acropolis of Athens as well as Atlantis at the time of their war. He noted that a spring on the Acropolis had been destroyed by an earthquake at that time. Then in 1939, Broneer rediscovered the spring together with evidence that it had been destroyed around 1200 BC, giving us a possible anchor for dating the Atlantis conflict.  Broneer’s papers are archived at the American School of Classical Studies in Athens.

An interesting 2020 review of Broneer’s work by Tony Petrangelo can be found on his Atlantis.FYI website(a).

Some years ago, Rainer W. Kühne drew attention to the fact that Plato referred to a spring (Crit.112d) on the Acropolis that was destroyed during an earthquake, which he noted had only existed for about 25 years, but was rediscovered by Broneer. This discovery has implications for the historical reality of Atlantis as well as the time of its demise.

The full text of this important illustrated paper is available online(b).

(a)  A General Program of Defense | Atlantis FYI