Cancho Roano is a Spanish archaeological site near Zalamea de la Serena in Badajoz province. A 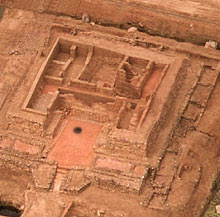 feature of the site is that it “appears to have been ritually burned and sealed in rammed earth in a manner similar to Etruscan ceremonies”(a). When I read this I was reminded of Göbekli Tepe which was also deliberately buried!

Richard Freund considers Cancho Roano to be a ‘memorial city’ constructed to represent the lost city of Tartessos, which Freund considers to have been Atlantis. This idea is born of nothing but Freund’s fertile imagination and three concentric circles on a stele. Plato describes the capital of Atlantis as circular while Cancho Roano seems to be a large single square building!