Maurice Chatelain has worked as an engineer for a NASA sub-contractor, 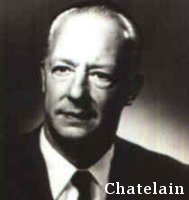 who apparently left before the Apollo 11 landing on the Moon. He is the author of Our Cosmic Ancestors[1111], in which he made unsubstantiated claims about alien vehicles on our satellite(a). His UFO claims were debunked by Jim Oberg, who did work directly for NASA(b).

Chatelain also claimed that within a 450-mile radius of the Aegean island of Delos that there were 13 mystical sites, when connected by straight lines formed a perfect Maltese Cross(c)!

His book also contains a chapter on Atlantis, which offers a brief overview of the subject before opting for the Bahamas as the location of Plato’s ‘island’.