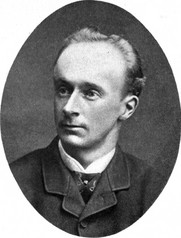 English author, usually described as a Universal Spiritualist. In 1884 he delivered a lecture in London entitled The Lost Continent, Atlantis [1220]  and two years later in San Francisco, in a more extended form.

He was greatly influenced by Ignatius Donnelly’s then recently published book  and he also opted for the Azores as the remnants of Atlantis,*describing Plato’s Island as ‘a bridge’ between Europe and America and speculating that “‘l’he fact of the existence of Atlantis as a centre of civilization, and a great sea~ of commerce between the eastern and western hemispheres, can alone satisfactorily account for the wonderful resemblance between the extant traces of antique civilizations on both sides of the world.”*