George H. Cooper (1859-1943) was an American writer who produced two books in which he claimed that ancient Britain was the starting place of 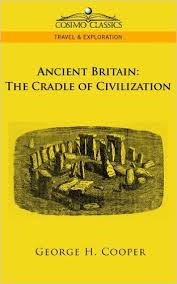 civilisation.  In the first, Ancient Britain: The Cradle of Civilisation[236], among a number of daring claims he proposes that the Garden of Eden had been situated on Salisbury Plain in Wiltshire near Stonehenge.

With regard to Atlantis, Cooper identifies Britain and Ireland as its location and was convinced that Stonehenge was the Pillars of Hercules.

His second offering, The Druid Bible[237] appears to be just a reworking of much of the material in the first, once again promoting the theme of Britain as the source of civilisation, but venturing further with a discussion of the Trojan War, Mexico and Easter Island.

He also refers to Ireland, claiming that “in fact, in Plato’s story, there are geographical descriptions which will correspond to the physical features of Ireland; so well indeed, that it is impossible to disconnect that island from the scheme.” He goes further and specifies Cork harbour as the most likely candidate as the harbour of Atlantis, although he confesses that this idea “fits Plato’s narrative very well if we leave out the geometric circles, etc.”