José Luis Espejo (1965- ) is a Catalan researcher and prolific writer(a). His subjects range from Leonardo da Vinci to comparative mythology to Hitler.

The whole truth about Atlantis), described at the time as the definitive Atlantis book. In this 680-page offering he insists on the reality of Atlantis, but not necessarily with that name.

His latest book, Ecos de la Atlántida [1606] (Echoes of Atlantis), reviews the destruction and aftermath of an ancient civilisation, which he contends was destroyed 11,500 years ago. He equates Atlantis with Atalaentre of the Hindus, Aztlan of the Amerindians as well as the Hebrew Garden of Eden.

It would appear that the nature of this 512-page book required an understandable amount of speculation.
(a) https://translate.google.co.uk/translate?hl=en&sl=es&u=https://www.joseluisespejo.com/&prev=search

New Hebrides is an archipelago in the Pacific northeast of New Caledonia and west of Fiji. In 1904 it was dragged into the world of Atlantology, when the Cairo News of Illinois published(a) a sermon by the Rev. Frank de Witt Talmage. He was a son of the celebrated ‘fire and brimstone’ preacher Thomas de Witt Talmage. In his sermon he refers to unnamed explorers claiming that the New Hebrides were the mountain peaks of sunken Atlantis. However, he goes further and infers a connection between Atlantis and the Garden of Eden.

I am indebted to Atlantisforschung.de for unearthing this unexpected piece of information(b). I agree that it is regrettable that the identity of the explorers was not given.

Irwanto also claims that the biblical Garden of Eden and the legendary island of Taprobane were situated on the island of Kilimantan. In an extensive online(b) article in November 2015, he identified the Indonesian island of Sumatra as the land of Punt, >which he thinks was also known as the Ophir referred to in the Old Testament (1 Kings 9.26 & 10.11).<

In June 2017, Irwanto published an illustrated paper(e) on Aurea Chersonesus, referred to by Ptolemy in his 2nd century Geographia . Irwanto has matched details in Ptolemy’s description with a place in western Sumatra called Tanjungemas renowned for its gold mines in the ancient times. 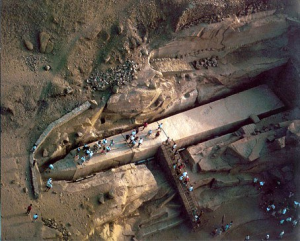 Timothy J. Stephany is a keen student of mythology in general and Norse mythology(a) in particular. He has also written a book, The Eden Enigma[840],  which explores the background to the biblical story of the Garden of Eden. He has an extensive website that offers a fascinating and well illustrated paper(b) on the remarkable Göbekli Tepe site which includes a number of carved animal that Stephany suggests may be a representation of constellations when they were carved. His site also includes a review(c) of Jim Allen’s theory,  which places Atlantis in the Andes, but concludes at the end of a lengthy paper that the evidence is not strong enough. His article on paleoastronomy(d) should be read in conjunction with his comments on Göbekli Tepe.

interest in music and ancient history. In 1976 he published Noahs Weg zum Amazonas (Noah’s way to the Amazon), which was translated into English by Martin Ebon and republished as Lost Survivors of the Deluge[0777]. In it he links the biblical deluge with the destruction of Atlantis. He also identifies Sumerian flood of Gilgamesh with that of Noah. In fact he suggests that Gilgamesh voyaged from Lixus to South America . However, overall he seems happy to follow the ideas of Otto Muck who placed Atlantis in the Atlantic and destroyed by an asteroid impact. Von Hassler further identifies Atlantis with the Garden of Eden. His idea that Noah sailed the Atlantic is to say the least wildly speculative, but no doubt broadly welcomed by the Mormons.