David Antelo Justiano (1971- ) is a Bolivian engineer who has identified a plain in the Beni region of Bolivia, north-east of La Paz, as that referred to by Plato as being adjacent to Atlantis. Antelo has posted a video on YouTube(a), which offers a comparison of the topography of the region with Plato’s description of Atlantis. It includes a network of pre-Columbian waterways and a 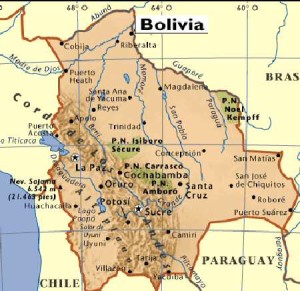 Allan & Delair note that the Beni Basin is also home to features comparable with the Carolina Bays of North America[014.287].  In August 2013 the discovery was announced(d) of middens in the Beni region that were dated to 8000 BC.

Jim Allen, is the leading advocate of Atlantis in the Andes, specifically on the Altiplano to the west of Lake Poopo. Allen refutes Antelo’s claim at the end of a website(b) dealing with Plato’s Atlantis Plain.

Antelo published his thesis in 2008 in a book entitled La Conspiración Atlante (The Atlantis Conspiracy).