Dominique Alexandre Godron (1807-1880) was a French botanist and professor of natural history at Nancy University, who, in 1868, founded 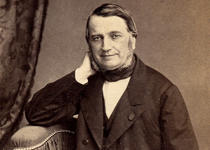 “The School of Atlantis” in North Africa. Godron believed that Atlantis was to be found in the Sahara desert and delivered a series of lectures(a) on the subject at the University. Both Godron and Berlioux were inspired by the writings of Diodorus Siculus who wrote extensively about ancient North Africa.

Godron was known to have corresponded with his contemporary Charles Darwin on botanical matters.