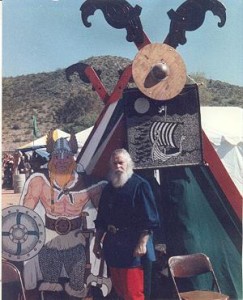 has a passionate interest in the Scandinavian runes and writes under the nom de plume of ‘Ragnar-Storyteller’. Peterson has some rather odd ideas about combining the runes with Quantum Physics to produce a variety of effects including healing.

Peterson has also studied ancient Scandinavian history with particular reference to pre-Columbian visits to the Americas, North and South. He also subscribes to Spanuth’s suggestion that the ‘Sea Peoples’ who invaded Egypt in the 2nd millennium BC were from Scandinavia and should have been designated ‘North Sea Peoples’. Peterson seems to have adopted most of Spanuth’s principal contentions – amber was Plato’s orichalcum, Phaeton destroyed Atlantis leading to the migration of the Atlantean survivors, proto-Vikings, to migrate south invading Egypt. He also locates the capital, Basileia, off the Danish coast. He has written several blogs on this subject(a)(b).

>Some of his other unorthodox views are to be found in his 111th blog(c). One of which is the view that the Greeks got their alphabet from the Phoenicians, who in turn got theirs from the Frisians! Another gem is his suggestion that “the Macedonians, as well as Alexander the Great, are descendants of the Frisian people!” The Frisians are considered by Peterson to be Atlantean.<

>The controversial Oera Linda Book is also claimed to have an association with with a Frisian Atlantis, sometimes referred to as Atland.<