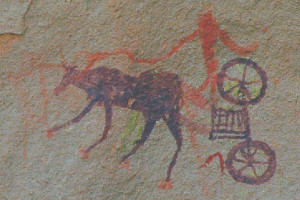 Frank Joseph identifies the Garamantes with the Sea Peoples whom he considers having been Atlantean refugees. However, the Garamantes are generally accepted as having developed urban centres in what is now southern Libya(a)(b), which is not what you might expect from a maritime culture. Recent satellite images(c) offer new information on the extent of the Garamantes domain.

(b) Ancient lakes of the Sahara – Innovations Report (archive.org) *