Edwin Guest (1800-1880) was an English academic, who, although he initially practiced law, later 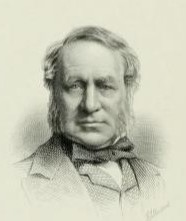 became better known as a philologist, historian and topographer. He was elected Master of Caius College, Cambridge in 1852 and later was briefly Vice-Chancellor of Cambridge University.

His Origines Celticae[1069] was published posthumously in 1883(a)(b) in which he commented on the Atlantis debate as follows:

That the tale afterwards should be overlaid with fable is what might be expected, but there is no reason that I can see, why it may not originally be based on truth.