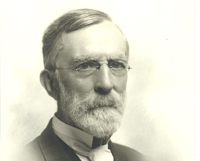 the late 19th century and was later appointed a Superior Court Judge (1903-1909).  He also served as chairman of the Ohio Mechanics Institute, Department of Science and Arts and was an editor of the Cincinnati Quarterly Journal of Science. In July 1875 he wrote an eighteen-page article[405] for that Journal in which linked the Mayan and other early American cultures with Atlantis. It is claimed(a) that this article was the inspiration for Ignatius Donnelly’s book published a few years later.