Robert Paul Ishoy is a graduate of California State University Fresno (CSUF) where he got his BA Degree in History and an Associate’s Degree in Social Sciences. His website tells us that “Since completion of his education Robert has served in the military as an intelligence specialist and as a paratrooper in the 82nd Airborne Division. After the military, Robert has worked in Corporate Security and Loss Prevention for major retail and distribution companies and is currently employed as a government contractor under the Department of Defense as an intelligence specialist.”

His thesis, which promotes the idea that Sardinia was the site of Atlantis, was written during his senior year at CSUF.  In 2010 he was proposing a multidisciplinary expedition to the Italian island in order to explore and investigate in situ the evidence for the possible existence of Atlantis there. This expedition is now planned for 2015.

A promotional video is available on YouTube(b).

Ishoy maintains a website(a) to support his views and is at pains to point out that his theory was in the public domain at least two years before Sergio Frau had his book published. However, the earliest claim to the Sardinian Hypothesis must go to Paolo Valente Poddighe who put it forward in 1982. Poddighe has accused Frau of plagiarism. 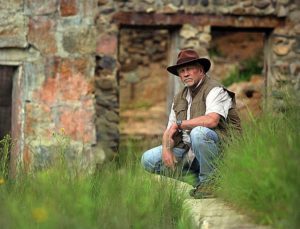 It is remarkable that in the same week that Sergio Frau generated renewed interest in his ‘Atlantis in Sardinia’ theory that news emerged(c) that Ishoy, who promoted the same idea three decades ago has now had the support of National Geographic, who were planning a documentary on the concept, co-produced by James Cameron, of Titanic fame and Simcha Jacobovici, both of whom were also responsible for the documentary The Lost Tomb of Jesus. However, Diaz-Montexano believed that the focus of the documentary was to be on his theories!

In the end the over-hyped NG documentary proved nothing.