Justus Lipsius (Joest Lips) (1547-1606) was a Flemish humanist, philologist and an advocate for the 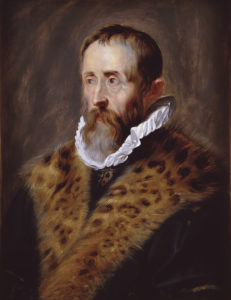 revival of Stoicism in the 16th century. In Book One, chapter 16 of the De Constantia (Book of Constancy) he unequivocally states his belief in the reality of Atlantis(a).*The original as well as an English translation are available online [1493].*

He also speculated on a migration of animals from Africa to America by way of Atlantis, which he considered to be a large landmass in the Atlantic, recorded in the correspondence of Charles Darwin(b).

The Justus Lipsius Building in Brussels has been the headquarters of the Council of the European Union since 1995.