Stephen P. Kershaw is a Classics scholar with a particular interest in mythology. He was editor of The Penguin Dictionary of 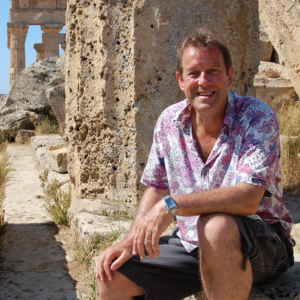 Classical Mythology [1406] and has published a short series in his own right; A Brief Guide to the Greek Myths [1407], A Brief Guide to Classical Civilization [1408] and A Brief History of the Roman Empire [1409]. In September 2017, A Brief History of Atlantis [1410]  was published, which is a valuable introduction to the wide variety of opinions regarding Atlantis that have been expressed since the time of Plato.

His first chapter gives a number of instances where highly regarded ancient geographers have been quite inaccurate, citing the Roman belief that the west of Britain faced south. He concludes with ”the point here is that whether we are dealing with descriptions of the mythical Scherie, the real Britannia of Plato’s Atlantis, ancient geographical knowledge can be vague and contradictory.”

Kershaw is an Atlantis sceptic who concludes that ”Too many difficulties get in the way of accepting Plato’s story at face value: the chronology of putting a developed civilisation in the Mesolithic period; the geological impossibility of there being a sunken continent beneath the Atlantic; the total absence of any finds from the ancient world carrying the name Atlantis; and the fact that there is no mention anywhere of Atlantis in any ancient text prior to Plato’s – not even in Herodotus or Solon. Put bluntly, there is no source of the Atlantis story other than Plato. Atlantis is just a tale from Egypt ‘the most brilliant and enduring of all hoaxes’(Trevor Bryce [1499])”

With regard to the above, I must point out that the date for Atlantis noted by Plato is regarded by many atlantologists as a corruption and have offered a number of possible explanations for what is obviously incorrect. With regard to an Atlantic location, I along with others favour a Mediterranean setting. The name Atlantis was part of the Hellenising of the narrative recounting the war with an alliance whose members were likely to have been known by a variety of different names. Plato also explains how Greece lost much of its history as a result of catastrophic floods (Timaeus 23b), which may explain why the Atlantis story was new to Solon.

In January 2017, the University of Oxford began a short course on Plato’s Atlantis with Kershaw as the lecturer.

October 2018 saw the publication of Kershaw’s The Search for Atlantis [1585] which deals with the manner in which Plato’s narrative has been received over the centuries.

>This is now freely available online(c).<

What I found unexpected was the lukewarm review that Kershaw’s book was given by fellow Atlantis sceptic, Jason Colavito(b).