Michio Kushi (1926-2014) was a Japanese promoter of modern macrobiotics, which he helped to introduce to the United 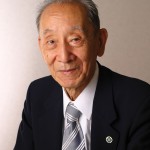 States after moving there after the war.

In 1992, he teamed up with a colleague, Edward Esko, to write Forgotten Worlds[1381] in which they proposed that Atlantis, situated in the Atlantic had been destroyed as a result of a Pole Shift.