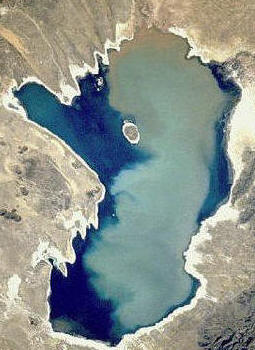 Lake Poopó in the Bolivian Andes is adjacent to a large plain that is claimed, by Jim Allen, to be the site of Atlantis. Allen has reduced Plato’s dimensions by half as he contends that originally the South Americans counted with a base of twenty rather than our base of ten. With this arbitrary reduction he found that Plato’s plain of Atlantis could be identified with the plain to the west of Lake Poopó. Allen names the exact site of Atlantis itself as Pampa Aullagas.

Unfortunately, by 2015, Poopó, Bolivia’s second largest lake had been reduced to a salt pan and Titicaca, the largest, was also in trouble(a).