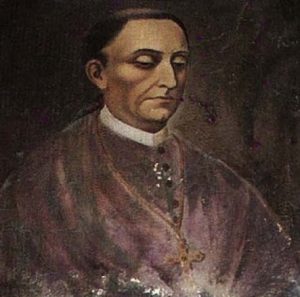 Diego de Landa (1524- 1579) was the Franciscan bishop of Yucatán who played a significant part in promoting the idea that the Ten Lost Tribes of Israel had migrated to the Americas, citing local Mayan legends that their ancestors had come from the East, aided by divine intervention! Others, such as Brasseur de Bourbourg, seized on this idea and expanded it to link the Maya with Atlantis.

Landa was ‘a nasty piece of work’, showing great cruelty towards the indigenous people and little respect for their culture.>He was responsible for the burning of nearly all of the written documents of the Maya, leaving us only three complete books from before the Spanish invasion.<He is also considered to have produced a truly dreadful decipherment of the Maya script,>in no small way the result of his incorrect belief that the script was based on an alphabet. Shortly after his death his papers were lost and remained so until 1862 when some of them were found by Brasseur de Bourbourg in the archives at the Royal Academy of History in Madrid. Brasseur attempted to build on the translation work of de Landa but also failed. Nevertheless, he announced that the Maya had originally come to Yucatán from Atlantis.

A subsequent attempt by Augustus le Plongeon to decrypt the script was also unsuccessful, but it did not deter him from uniquely claiming that Atlantis had been a colony of the Maya. Regarding the script today (2021), over 90 per cent of the Maya texts can now be read with reasonable accuracy(a).<