Lemuria was a name invented in 1864 by the English zoologist Philip Lutley Sclater (1829-1913) to describe a hypothetical landmass in the Indian Ocean that was used to explain the isolation of lemurs on Madagascar while related fossils were spread across Africa and South-East Asia. The name has also been credited to the English geologist, William Thomas Blanford (1832-1905).  It is further claimed that Ernst Heinrich Haeckel (1834-1919), the German professor of zoology and ardent supporter of Darwin, had made a similar suggestion regarding a sunken continent before Sclater without attributing a particular name to it.

Sir John Murray (1841-1914), a renowned British oceanographer, claimed(d) to have identified traces of this lost continent in the Indian Ocean.

Mu on the other hand is the name given to a fictional continent that was supposed to have existed in the Mid-to-Southern Pacific Ocean and given popular recognition by the writings of James Churchward who promoted it as the Atlantis of the Pacific. However, many writers continue to use the two words interchangeably. Frank Joseph links the destruction of ‘Lemuria’ with the Plagues of Egypt[106][107].

Madame Blavatsky claimed Lemuria as a pre-Atlantis source of Ancient Wisdom. She ‘revealed’ that the Lemurians had four armed egg-laying hermaphrodites with a third eye. Unfortunately, Blavatsky’s esoteric bosh is still touted widely today in books and the Internet(a).

It is disturbing that presumably intelligent people such as Egerton Sykes could have dared to describe the inhabitants of a non-existent country in the following terms – “The Lemurians were short, squat, with square faces and large ears, relatively ugly to Western eyes”(e). 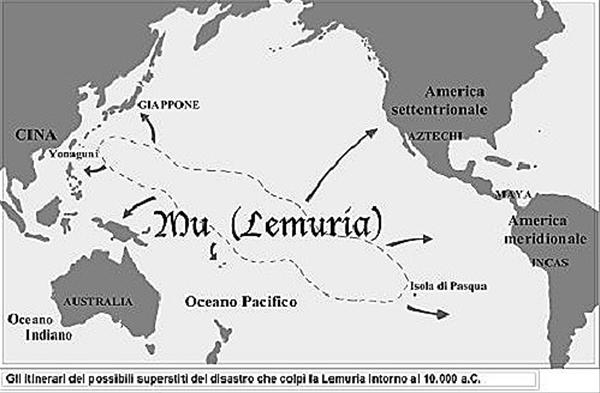 Katherine Folliot in her Atlantis Revisited[054] has an interesting passage on Lemuria which I shall quote in full;

“Several Atlantologists have claimed that Lemuria was none other than the lost island of Atlantis, and although their theory has generally considered to be fanciful, it may well be based on true facts. The word Lemuria is a bastardization of the Arab word ‘al amur’ which means ‘the West’, or ‘the western land’, and one may surmise that this was the name given by medieval Arab scholars to the ‘western land’ mentioned in the surviving Egyptian archives in Alexandria, which was stated to have disappeared under the sea. When Arabia lost its cultural predominance at the end of the Middle Ages, ‘al Amur’ became distorted into ‘Lemur’, and later into ‘Lemuria’, but the land this inaccurate name designated was in all probability the same as that described by the Egyptian priest of Sais to Solon, the ‘western land’ of Atlantis.”

Even more bizarre was a report in the 30th October 1955 edition of the San Francisco Examiner, which linked the American ‘Bigfoot’ or Sasquatch with a sunken Lemuria, suggesting that he was a highly developed survivor of that lost continent!

On a more serious note, February 2013 saw a report(b) of the discovery of an ancient continent in the Indian Ocean. At first sight fans of the Mu/Lemuria concept must have been quite excited until it was realised that this sunken landmass was dated as being many hundreds of millions of years old.

In a September 2014 interview(c) Graham Hancock echoed my views regarding Lemuria and Mu when he responded to a question on the subject with, “Well, let’s get Lemuria out of the way first. Lemuria is actually a 19th-century idea and there is no ancient text that refers to Lemuria. Lemuria is about the fact that fossils of a species of animal, the lemur, are found on both sides of the Indian Ocean. The suggestion was that there must have been some joining continent at one point between Madagascar and India. At any rate, I repeat, and this is my point –  there’s no ancient testimony for the existence of a place called “Lemuria”. The ancient testimony from Mu is also extremely dubious since it rests on a 19th-century mistranslation of a Mayan text popularized by Augustus Le Plongeon and then subsequently elaborated by James Churchward in the 1920s and 1930s. But never mind the names, the fact is that we do have genuinely ancient traditions of lost civilisations and lost lands all around the world. That’s why I find Lemuria and Mu a bit of a distraction because Mu rests on a mistranslation of an ancient text and Lemuria is entirely a 19th-century idea.