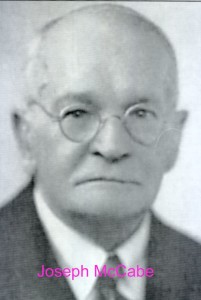 Joseph McCabe (1867-1955) was a Catholic priest early in life but later renounced it, becoming a devout freethinker and considerable a thorn in the side of the Catholic Church.

In the early 1920’s he visited Crete, following which, he was happy to express the view that it had been the location of Plato’s Atlantis(a).

He was a prolific writer with many of his books available online(b).