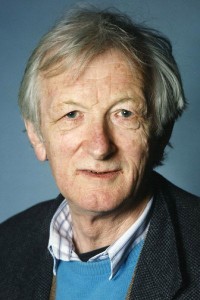 John Michell (1933-2009) was educated at Eton and Cambridge. He had the strongly held view that ancient civilisations lived in greater harmony with nature and the zodiac, reflected in the alignment of ‘holy’ locations. This concept was elaborated in his 1969 book[206] in which he brought together ley lines, astro-archaeology, and sacred geometry. The book was revised as The New View Over Atlantis[0704] in 1983.

>A more sober treatment of the subject of astro-archaeology came from Peter Lancaster-Brown (1927-2005), who accused Michell of ‘manipulating’ Alexander Thom’s Megalithic yard so that he equated it “with all manner of numerical and metrical puzzles of the ancient world (complete with mystical overtones)” [1840.229]. Lancaster-Brown is also highly critical of Michell’s comments regarding the Great Pyramid, describing his ‘metrical schemings’ as ‘breathtaking’. [p232]<

In The Lost Science of Measuring the Earth [1791], Michell and his co-author, Robin Heath claimed that “prehistoric Britons knew the dimensions of the Earth and had undertaken an accurate survey of the British Isles pre-3000 BC. My question is – why would they want to?

Michell was the author of many books(a) but never dealt directly with the leading questions surrounding Plato’s Atlantis, such as its location, time, or date. He uses Atlantis as a name to describe a very ancient global civilisation that possessed incredible powers such as the ability to fly and levitate the megalithic stones that are still to be seen throughout the planet. He offers lots of assertion and speculation, but very little hard evidence.