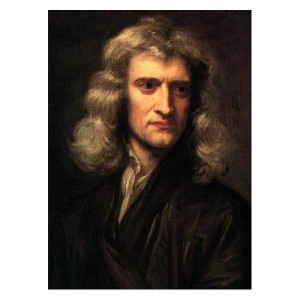 Isaac Newton (1643-1727) was an astronomer, mathematician, philosopher and theologian (he is generally considered to have been an Arian Christian, opposing the doctrine of the Trinity). He also proposed that Armageddon will come in 2060(c), which is something of a relief for me as I would have to be celebrating my one hundred and seventeenth birthday that year. However, another claim(e) is that he favoured September 23rd 2015 for the ‘Second Coming’ of Christ. Oops!

He wrote a number of important works including The Chronology of Ancient Kingdoms Amended[1101], which was published in 1728. In it he discussed a range of mythological links to Atlantis, including a possible connection with Homer’s Ogygia. Newton’s interest in the subject was such that he ordered a copy of Olof Rudbeck’s multi-volume Atlantica.

A paper on the exaggerated antiquity presented by ancient writers was published some years ago by the Society for Interdisciplinary Studies (SIS). In it Newton’s revisionism is extensively discussed(h).

Wikipedia refers to Newton’s belief in Atlantis as follows: Found within “The Chronology of Ancient Kingdoms”, are several passages that directly mention the mythical land of Atlantis. The first such passage is part of his Short Chronical which indicates his belief that Homer’s Ulysses left the island of Ogygia in 896 BC. In Greek Mythology, Ogygia was home to Calypso, the daughter of Atlas (after whom Atlantis was named). Some scholars have suggested that Ogygia and Atlantis are locationally connected, or possibly the same island. From his writings it appears Newton may have shared this belief. Newton also lists Cadis or Cales as possible candidates for Ogygia, though he does not cite his reasons for believing so. Within the same material Newton mentions that according to ancient sources, Atlantis had been as big as all Europe, Africa and Asia, but was sunk into the Sea.

Newton may have been the first in his Principia Mathematica  of 1687 to suggest the idea of polar wandering. He was also arguably the first to develop calculus as well as producing a ground-breaking work on optics, however, he also had his failures, such as spending twenty fruitless years experimenting with alchemy(d). Although Newton and Gottfried Leibnitz are generally credited with discovering ‘infinite series’, one of the basic components of calculus, it has now been shown that they were predated by Indian mathematicians in Kerala around 1350.

According to his biographer, Col. R. de Villamil, Newton lived in an ‘atmosphere of crimson’ having furniture and furnishings adorned with his favourite colour.