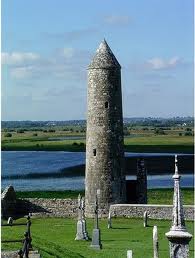 sponsored a competition for the most appropriate essay, which explained the origin and purpose of Ireland’s Round Towers. The winner’s prize went to George Petrie. O’Brien’s thesis was considered too radical and so, controversially, O’Brien was only awarded a consolation prize of £20.

His work was published in 1834[124] and republished in more recent years with new but totally misleading titles that imply that the author linked Ireland with Atlantis[125][126]. The book has nothing to do with Atlantis or Plato but is an attempt to attribute the building of the famous round towers of Ireland to the Tuatha dé Danann who invaded Ireland in the distant mists of time and whom O’Brien contended came originally from Persia. The book is written in the turgid style of the period and today would not be considered an ‘easy read’. However, his book can now be read or downloaded from the internet for free(a).

While O’Brien’s theory may appear outlandish today, the 21st century has continued to generate revolutionary 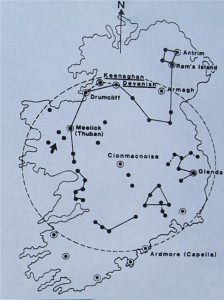 theories regarding our round towers, relating to both their function and location. American professor Phil Callahan, after studying a map of Ireland showing the towers he realised that “the towers formed a star map of the northern night sky at the time of the winter solstice.” However he goes further(b)(c), claiming that “Soils around round towers are highly paramagnetic and enjoy great fertility.”
Callahan believes that the Irish towers act as wave-guides or aerials for extra-low-frequency (ELF) radiation from high above Earth ( Schumann radiation) and the sun . Vital to our health, ELF waves are able to penetrate water and soil, unlike higher frequencies of radiation. To amplify incoming ELF, towers must be paramagnetic, and the effect is enhanced even more when paramagnetic and diamagnetic (i.e. weakly repelled by a magnet) materials are sandwiched together. Callahan’s theories are more fully explored in his Ancient Mysteries, Modern Vision[1528].

>(c) Philip Callahan and The Round Towers | MalagaBay (archive.org)<