Charles D. Pfund is a New York State correctional officer and the author of Antediluvian World: The End of the Myth[1079].  His website(b) begins with an examination of a 1482 map by the Italian cartographer Francesco Berlinghieri. A version of his map depicts the Fortunate Islands as a large island with mountains in the Atlantic off the coast of Africa. Pfund then 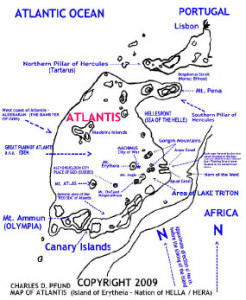 compares this speculative map with underwater features in the region revealed by modern technology and perceives a match. Next he proceeds to identify these features as Atlantis, which include the Canaries in the south stretching northward to include the Madeira archipelago.

Among the many other controversial claims made by Pfund is a 10,000 BC date for the existence of Atlantis,  that Achilles was Atlas and that Atlanteans resettled Greece after the Flood!

Pfund then unexpectedly includes a discussion on ancient ‘divination livers’(c) found in Mesopotamia and claims that some of them represent his Atlantis in the Atlantic! It is clear that the author’s source of inspiration is the work of Donnelly, whom he refers to as the ‘Great’ Ignatius Donnelly (although omitted from the index!).

I am not convinced. However, anyone wishing to investigate his ideas further must read his first book before tackling the second one. Overall, whatever one might think about Pfund’s theories, you cannot help admiring the level of research that went into the writing of this book. In my opinion, the input of a professional editor would have improved the text as there is a lot of repetition, even unnecessarily repeating images. There is also an irritating overuse of bold text and underlining, reminiscent of tabloid newspapers.

Pfund’s second book, Antediluvian World: A New Interpretation of Plato’s Writings on Atlantis [1754] was published in 2019 in which he continues his claim of a Stone Age Atlantis in the Atlantic. He devotes much of the book to offering his translation of Plato’s Atlantis texts. For good measure, he combines this with biblical commentary as well as a discussion of ‘liver maps’. Again the lack of an editor is obvious with Pfund continually referring to himself as “the author of this work”. Again he is rather short on evidence but long on speculation.