Martin Alonzo Pinzon (1441-1493) is probably best known as the captain of the Pinta, one of the three ships in Columbus’ first voyage to the New World. However, while Columbus garnered all the fame, it 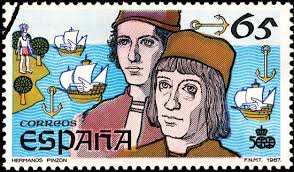 seems that Pinzon should have been accorded even greater recognition. According to Steven Sora in an Atlantis Rising article in 2015(a), Pinzon and his brother, Vincente who commanded the Nina, had already crossed the Atlantic three times before Columbus, a claim Sora supports with three sources. They apparently made landfall in was later named Brazil.

Roger Coghill, in The Message of Atlantis[494.1040] notes that Pinzon died only days after returning home “believing on his death bed that he had at last discovered the island of Atlantis.” However, Coghill does not give any reference.

Half a millennium later the achievements of the Pinzons were finally recognised in the form of a postage stamp.