Guillaume Postel (1510-1581) was a French linguist and astronomer, who was something of a child prodigy becoming a professor of Arabic at 29, but in 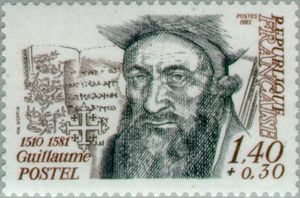 later life fell foul of the Inquisition spending most of his last 20 years in prison. He considered France to be the kingdom of the ‘chosen people’!

Postel, along with many of his contemporaries, considered that America had been the home of Atlantis., which he noted on his 1578 world map, Polo aptata Nova Charta Universi. In fact, he had already suggested naming the newly discovered American continent ‘Atlantis’ as early as 1561 in his Cosmographicae disciplinae compendium [1651]+.

As a linguist, he was impressed with the similarity of the ‘Aztlán’of Mexico with the ‘Atlantis’ of Plato.