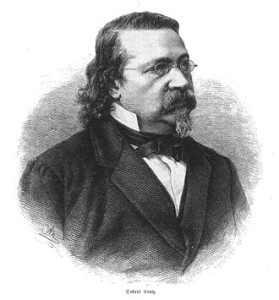 Eduard Prutz (1816-1872) was a German poet, a novelist and for ten years a professor of literature at the University of Halle. Prutz obsessively tried to demonstrate that the Phoenicians discovered America and that they, at the same time, re-discovered Atlantis there.*This was just an echo of the 16th century ideas of Gonzalo Fernández Oviedo y Valdéz*