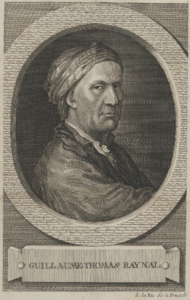 Guillaume Thomas François Raynal (1713-1796) was a French priest who turned to writing historical works after he was dismissed from his parish. He was co-author of a six-volume history of the European colonies in the Americas. He expressed support for the idea of an Atlantic Atlantis in his 1780 Histoire philosophique[1301].