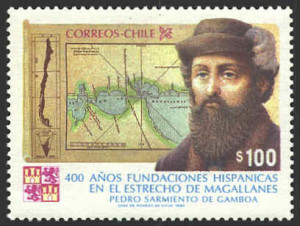 Pedro Sarmiento de Gamboa (1532-1592) was a Spanish explorer who has given us a valuable insight into history of the Incas with an important 16th century perspective on their Spanish conquerors. De Gamboa was convinced that the Native Americans were originally of European origin and speculated that they were in fact the descendants of refugees from Atlantis, which he calculated to have been destroyed in 1320 BC. He referred to Atlantis as Atlanticus.

What is also interesting is that he was also one of the earliest to suggest the application of months or lunar ‘years’ to the problem of Plato’s date for Atlantis. De Gamboa’s book has recently been republished as The History of the Incas[309], with a free English translation is also available as an eBook on the Internet(a).

(a) History of the Incas by Pedro Sarmiento de Gamboa – Free Ebook (archive.org)