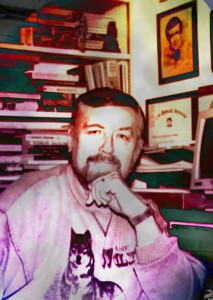 in 1936. He is the author of over 150 books and thousands of articles on a variety of subjects, such as crime, spirituality, UFO’s and other unexplained phenomena. He has written three books[127][128][129] related to Atlantis, but in the main they are re-workings of old and sometimes questionable material. Steiger subscribed to the ancient astronaut theory and concluded that Atlantis can only be found at the bottom of the sea. His book,  Atlantis Rising was republished in 2007.