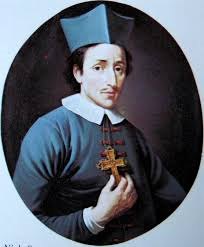 particularly geology, in which field he is considered by some to be ‘the father of stratigraphy’ being the first to clearly outline the three basic principles of stratigraphy: superposition, original horizontality and lateral continuity (b) . Nevertheless, David King has noted in his excellent book, Finding Atlantis[530.55] how Olof Rudbeck had developed his own version of stratigraphy during the same period.

In his later years, although he came from a Lutheran background, Steno became a Catholic priest and later a bishop,  during which stage, he developed an interest in theology. Steno is now on his way to becoming a saint having been beatified by Pope John Paul II in 1988.

Steno believed in the existence of Atlantis, but did not elaborate on its location(a). For in those accounts (of the ancients) I find many things of which the falsity rather than the truth seems doubtful to me. Such are the separation of the Mediterranean Sea from the western ocean; the passage from the Mediterranean into the Red Sea; and the submersion of the island Atlantis.[1503]