Fire in the Sea: The Santorini Volcano

Fire in the Sea: The Santorini Volcano: Natural History and the Legend of Atlantis [428] was written by the German, Walter Friedrich, who is now Professor of Geology at the University of Aarhus in Denmark. The book has now been translated by American Professor of Geology, Alexander McBirney.

The book tells the story of one of the most famous islands in the Aegean, Santorini, and its possible connection with the even 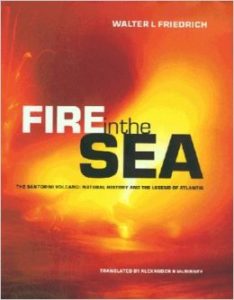 more famous Atlantis. Santorini has had many names over the millennia; to the ancient Greeks it was Calliste, later becoming Thera and today is Santorini, from the Italian, Santa Irene.

The island of Thera exploded in the second millennium BC with a degree of ferocity, that fortunately, has not been seen since, with the exception of the 1815 explosion on the Indonesian island of Tambora. It not only devastated the island itself, but probably led to the collapse of the Minoan civilisation centred on nearby Crete. This is disputed by some, who date the Minoan collapse to around one hundred and fifty years before the Theran eruption(s). Its effects were felt across large swathes of the Eastern Mediterranean region leading to crop failures and civil unrest. The eruption has been linked with the Biblical plagues of Egypt, but this is still the subject of debate as is the precise date of the eruption/s.

Friedrich considers the evidence for linking Atlantis with Thera and concludes that the question is still open and may be resolved through the ongoing excavations on the island at Akrotiri and in the Nile Delta.

The focus of the book is on the geology of the island and is written in a very readable style and excellently illustrated. Geologists, historians and the general public will find this a fascinating tome. It is a must for anyone interested in the history of the eastern Mediterranean and Atlantis.