Seafaring and Atlantis are inextricably linked. In Critias 117d Plato anachronistically refers to the shipyards of Atlantis being full of triremes, which were not developed until the 7th century BC, long after the demise of Atlantis. However, the term ‘trireme’ was probably employed by Plato in order to make his narrative more relevant to his audience. He credits the Atlantean navy of 1200 ships, which for me seems like borrowing and rounding of either the Achaean fleet (1186) in Homer’s Iliad or that of the Persian invaders (1207).

Seldom referred to, but perhaps even more interesting is to be found earlier in Critias 113e which reads “for at that time neither ships nor sailing were as yet in existence” in reference to the origins of Atlantis. However, we are given little information to bridge the time up to its development as a major trading entity. It is reasonable to assume a gap of several thousand years.

Recent studies(a) have suggested that primitive seafaring took place in the Mediterranean thousands of years earlier than originally thought and may even have been engaged in by Homo Erectus and Neanderthals in the form of island hopping and coastal-hugging, the latter continuing into historical times.

Plato’s describes an advanced maritime trading nation with a powerful naval capacity. How much was part of the original story brought from Egypt by Solon or if it was in any way embellished by Plato is unclear? The earliest known trading empire is that of the Minoans which began in the 3rd millennium BC and has led to many identifying them with the Atlanteans. However, there are very many other details in Plato’s narrative that seriously conflict with this hypothesis.

>The limitations of ancient seafaring raise many questions regarding the navigation supports available to these early sailors(b). Initially, sailing, probably for fishing, would have been confined to daytime travel and keeping within the sight of land. With the development of maritime trade, the demand for improved navigation methods also grew.

In time sailors acquired a familiarity with the night sky that enabled them to used the stars as navigational aids, given clear skies. Gradually, as nighttime travel became more common, the use of beacons and later lighthouses also expanded. The lighthouse at Pharos near Alexandria came to be counted as one of the wonders of the Old World. Similarly, it is thought that the Colossus at Rhodes performed a similar function.

Different navigation skills have been identified in different parts of the world. In the Pacific, the navigational capabilities of the Polynesians are legendary(c). The ancient Chinese employed magnetism(e) and in the cloudy North Atlantic, the Vikings used their ‘sunstones’(d).

In their book, Atlantis in America [244] Ivar Zapp & George Erikson claimed that the stone spheres of Costa Rica had a navigational function[p34] as Zapp discovered that the sightlines of all the stones remaining in their original positions, did point to important ancient sites such as Giza, Stonehenge and Easter Island!

A most imaginative proposal has come from Crichton E.M. Miller who has proposed [1918] that the ubiquitous Celtic Cross is an image of an ancient navigational device. He further claims that “This instrument can tell the time, find latitude and longitude, measure the angles of the stars, predict the solstices and equinoxes and measure the precession of the equinoxes. It can also find the

ecliptic pole as well as the north and south poles; it can make maps and charts, design pyramids and henges and—used in combination with these sites—can record and predict the cycles of nature and time(f)“. Then for good measure, he proceeded to patent the device.< 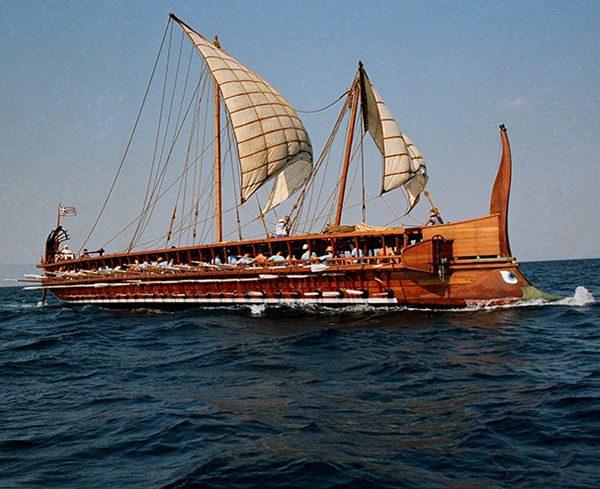 The Atlantean Navy consisted of 1,200 ships, according to Plato. Such a fleet would be totally unnecessary unless your potential enemies had a similar force. It is worth noting that that over 130 quotations from the Illiad and Odyssey have been identified in Plato’s writings, suggesting the possibility of him having adopted some of Homer’s nautical data. Homer records that the Achaean fleet consisted of  1,186 ships, a number that could be naturally rounded up to 1,200 – a coincidence?

Similarly, Herodotus records that the Persians had a fleet of 1,207 triremes at the Battle of Salamis (480 BC). It is a further remarkable coincidence that of all the military statistics recorded by Plato, the only number that is not an exact thousand, relates to the size of the Atlantean fleet. A number that is the rounded value of the Achaean fleet in the Trojan War and the Persian fleet which attacked Athens just 50 years before Plato was born. It is not improbable that 1,200 was used in this isolated instance as a  representation of the ultimate in naval power at that time! A website that reviews the classical sources relating to the Persian fleet in greater detail is available(c).

Since conventional archaeology identifies the Bronze Age Greeks and the Phoenicians in the Eastern Mediterranean as possessors of the earliest navies, the possibility of a naval force of such a great size 9600 BC is considered improbable if not completely impossible. Recent discoveries on Cyprus have provided evidence of primative seafaring in the region as early as 12,000 years ago. However, it appears that occasional travellers from Turkey and Syria who utilised crude stone tools arrived there in rather small boats. We are therefore forced to conclude that Plato’s reference to a powerful navy supporting an extensive merchant fleet is either a heavy embellishment of a real story regarding a prehistoric civilisation or an allusion to an actual Bronze Age thalassocracy.

An interesting series of illustrated articles(a) on ancient ships offers a useful background for the study of the Atlantean Navy.

Plato describes the Atlanteans as using triremes which is quite improbable as they were probably not developed until around the 7th century BC(b). It is more likely that Plato used the term trireme to make his narrative more relevant to his Greek audience.