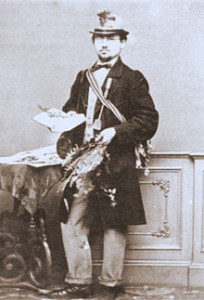 of the banana and arrived at the odd conclusion that the banana was brought to America when the North Pole had a tropical climate(a)!

>His ideas were referenced in William F. Warren‘s Paradise Found(a).<However, Ignatius Donnelly decided to modify Kuntze’s ideas and speculated on whether it was “more reasonable to suppose that the plantain, or banana, was cultivated by the people of Atlantis, and carried by their civilized colonies to the east and the west?”