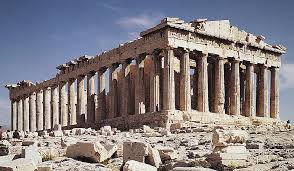 It has been long claimed that the Parthenon incorporated the Golden Ratio (1:1.618) in its design(b). This is now strongly refuted by>Chris Budd OBE, Professor of Applied Mathematics at the University of Bath(c)<and Samuel Arbesman a senior scholar at the Ewing Marion Kauffman Foundation(d).

The Parthenon was claimed by David Pinnegar(a) to have been constructed to commemorate the victory of the Athenians over the Atlanteans. He further contends that the frieze that adorned the Parthenon hold a representation of the debate to which Plato referred at the end of the Critias text. If this interpretation is true, is it not likely that Plato or any other classical writer would have referred to it? The frieze also appears to depict the Athenian war with the Amazons.

A full-scale copy of the Parthenon was constructed in 1897 in Nashville, Tennessee to celebrate the state’s centennial(f). Inside is the tallest (over 41ft)  indoor sculpture in the western world, depicting a stunning gold-covered image of Athena.