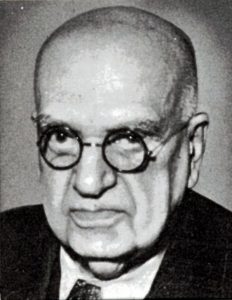 Siegfried Passarge (1866-1958) was a German professor of geography, who had Paul Borchardt as one of his students. When Borchardt proposed that Atlantis had been situated in the chotts of northeast Africa, Passarge investigated the theory but was not completely convinced. mainly because he was unable to identify the cause of the rupture between the chotts and the Gulf of Gabes. Despite this, he was not prepared to completely exclude the possibility that an ancient civilisation had existed in southern Tunisia

Passarge was a rabid anti-semite and was among the signatories of “the commitment of the professors at German universities and colleges to Adolf Hitler and the Nazi state”(a). It would appear unlikely that Passarge was aware of Borchardt’s Jewish ancestry!