Sergey Teleguin is a Russian professor of Philology and a leading advocate of the idea that the city of Tripura (Triple City) in Vedic tradition was the original inspiration behind Plato’s city of Atlantis. In support 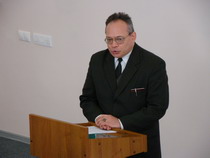 of his contention he has outlined a number of parallels between Plato’s account and the sacred texts of India, the Puranas and Mahabharata, in an extensive English excerpt(a) from his 2005 Russian book, Anatomy of a Myth[1122].

A further claim by Teleguin is that the Popol Vuh, the sacred book of the Maya gives clears evidence that they came from the far north – Ultima Thule.  He goes further and attributes a North Pole origin to both the Maya and the Indo-Europeans(b).

He has recently outlined his ideas further in an article for (Nov/Dec 2013) Issue 102 of Atlantis Rising magazine.

He recently reiterated, in an email, his view that Plato’s Atlantis story should only be accepted literally or not at all. It is difficult to accept that an academic could write such nonsense. He cannot be unaware that Plato’s narrative is composed of mythology, history and within the bounds of literary licence, some embellishment of his own. Otherwise, according to Teleguin, we are expected to believe that Clieto actually gave birth to five sets of male twins, that Athens fought a war before it existed and that Poseidon and Atlas were real people! The same absence of critical thinking allows people to believe that the world was created in seven days.