Alexander Voronin (1954- 2012) was arguably the doyen of Russian atlantology at the beginning of the 21st century. He had a background in law and journalism, both useful in his research and his position as 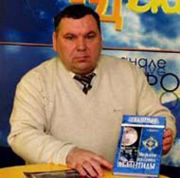 President (since 2003) of the Russian Society for the Study of the Problems of Atlantis (ROIPA(a)).

He was author of over a hundred papers and a number of books[796][797][798] related to ancient civilisations and Atlantis. Voronin was also the editor of the recent Almanac of the Last of Ancient Civilizations: KRONOS,  which discusses Atlantis, problems, searches, researchers and hypotheses. He sometimes used the noms de plume Alex Bran and Bran Athanasius. Unfortunately, all his work is available in Russian only. A fuller biography is available in Archive 3922.

He believes that Atlantis was located in the North Atlantic with many colonies in the islands of the Atlantic and North West Africa.

Late 2011 saw Voronin and a team of scientists carrying out research on megalithic sites in the Mediterranean working from the luxury sailing ship Running on Waves. I was honoured to meet Alexander while the ship was docked in Malta and to have had subsequent email contact with him and so was greatly saddened to learn of his death on November 6th 2012. Russian Atlantology has suffered a great loss.

(a) https://roipa-atlantida.narod.ru/ (The ROIPA link has been broken since early 2013)