Hubert Zeitlmair is a retired German real-estate investor, who became fascinated by the ancient history of Malta since he first visited there in 1993. He has been personally responsible for the discovery of an underwater ‘temple’, in less than 50 feet of water, one and a half miles off the east coast of Malta. Zeitlmair’s interpretation of his find is disputed by some Maltese archaeologists. 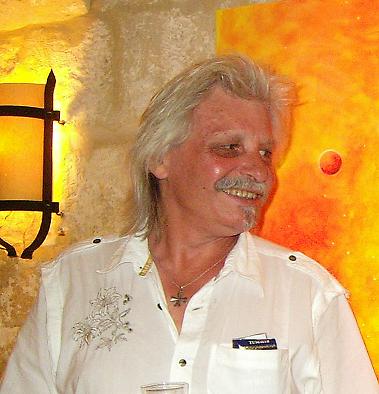 His ideas are a strange mixture, as he believes that the temple was submerged at the end of the of the last Ice Age by Noah’s Flood, but attributes its construction to alien visitors from Planet X – Nibiru a la Zechariah Sitchin. He has published, in German, his ideas in a recent book[465] and also has a website(a) where he organises tours.

Some of his most recent pronouncements can only be described as New Age drivel. In order to justify this overgenerous comment, I quote just one selection from his website(b).

“The 11th 3 mount pattern in the middle is the representation in miniature of the whole Mediterranean, with Gozo as the dominating extinct volcano, and its two sediment mounts MALTA, and COMMINO. It was once called at.la.ams which means:

»The Pillar Towering Towards Heaven«;

This is the name of Malta when spoken from right to left.

Malta, The Place Of The Vortex pillar!!

This place Malta was doubtless the matrix of the Atlantean magnetic power system. It brought together the other sub-energy points around the world, which all converged here. Besides the fact that the these stone circle temples erected along the Coastline of today as well as those on the seabed, were meant to serve as a vast stone astronomical calculator , they also form altogether, an incredibly powerful ring of energy. They are responsible for this now invisible vortex of energy generated by a vast electromagnetic field system and here is the biggest sphere of activity in Europe.

What a load of tosh!

Zeitlmair recently (Oct.’14) appeared on the US TV show In Search of Aliens, where he again demonstrated his penchant for the use of verbal bovine manure.

Jason Colavito who regularly reviews the show applied his forensic skills to the episode that included the Zeitlmair segment(c), which included his ideas on Planet X, extraterrestrials and genetic manipulation by space aliens.