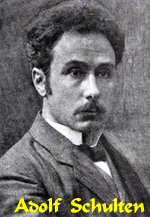 archaeologist who rediscovered the ancient Iberian city of Numantia which had been destroyed by the Romans in 134 B.C. and lost for hundreds of years. Schulten was possibly the first to propose, in the early 20th century, that Tarshish mentioned in the Bible was a reference to Tartessos, a cultural centre located in South West Spain and extending across the Strait of Gibraltar into Morocco. He went further and proposed that Tartessos was in fact Atlantis or at least an Atlantean colony.

At great personal expense, he spent many years searching for the legendary Tartessos at the mouths of rivers and the cities of Cadiz, Huelva and Seville. However, as Jürgen Spanuth has pointed out, Schulten appears to have dated the demise of Tartessoss to around 500 BC, which was about forty years after Solon’s visit to Egypt, which would imply that Tartessos was not Atlantis.

Schulten wrote a number of articles and books[055], in German, on his investigations. One of his works, Tartessos, in Spanish, can be downloaded from the Internet(a), use your Google translator for English version.