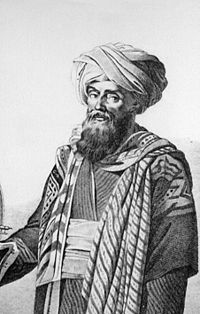 Badia y Leblich, a Spanish traveller and thought to be a spy for Joseph Bonaparte. Early in the 19th century, he published The Ancient Island of Atlantis[012]  an account of his journeys in North Africa and the Middle East.

*He wrote of the Atlas Mountains being the ancient island of Atlantis when the Sahara was a huge interior sea in the centre of Africa, known as Mar de la Nigricia. A map of 1802 based on Ali Bey’s description of this inland sea is available on the Internet(a). The same map shows Atlantis extending from Tunisia and Libya into the Mediterranean filling most of the Gulf of Sirtis.>Alberto Arecchi, in more recent times, has proposed a similar geographical spread for Atlantis(c).<

Ali Bey appears to have been the first to suggest North Africa as the location of Atlantis an idea that then lay dormant for half a century until 1868 when D.A. Godron advocated Morocco as its home.